Skip to content
A few weeks ago, just after I reactivated my account, I decided that I would start down the path of the pirate after being inspired by some of the stories here on EVE Pirate. I started training the skills for Gallente ships to use for solo pvp and set about flipping cans in my stabbed, shield extended Hoarder, or sometimes an Incursus.

After about a week, I came across two Retrievers mining into a can in Anntiri piloted by bbylethh and shawzy007. I examine the can, just one piece of ore, great. I steal it anyway to provoke a response, but not honestly expecting anything, I just sit there, looking lazily at the two mining barges, expecting this to be just another pair of your standard breed of miner, smart enough to ignore the can flipping scum like myself. I was wrong...

One of the retrievers locked me and set his light drones on me within seconds of flipping the can, I panicked a little bit, hit the afterburner and flew off in some random direction to avoid being totally torn apart by the drones, half expecting a warp scrambler or something to hit me. I came to my senses and realized I was doing fine, I decided to play dumb. I targeted one of the drones and fired at it a couple times, trying my best to look like a noob caught with his pants down. I warp out with only a little armor damage.

I headed over to Isikesu to pick up my drake and maybe grab a retriever kill. As I was warping back to the belt, I expected to see a pair of Ravens or some other nasty surprise waiting and find.... the two retrievers, still mining. I lock them both, fire at the further one and approach the closer one to try and scram him, but with no propulsion module this isnt easy, being that there was not enough time to grab one before the aggression wore off.

The first volley of heavy missiles slams into shawzy, wiping out his shields and half of his armor in one shot. The second volley cleanly destroys the remaining armor and all of his structure, leaving me with a pair of modulated strip miner IIs, here is the link. Im still not close enough to scramble bbylethh, but my first volley of missiles is as effective on him as shawzy, but he is able to warp out thanks to me not properly equipping my ship before fighting these two.

I snag the miners and head back to Isikesu, quite happy with the little haul. I grab my Incursus again, and just for the heck of it, I head back to the belt in Anntiri to see if my new friends are still here. As I warp in, I see nothing, I sit there for a few seconds, until shawzy007 warps into the belt in a Raven. The first thing going through my head, naturally, is RUN! Surely my little frigate is no match for this massive ship! He launches two Hammerhead Is, yes two, not five... Once again I play dumb, and fire a couple times at one before warping off.

Sitting in the station, I figure I might as well give it a shot. Id gotten my first two kills in lowsec without dying recently and I needed to have my confidence shaken for my own good. I warp back to find the belt to find bbylethh still there, he fires a volley of cruise missiles at me, but only one or two, perhaps thinking Im not worth what they cost or something for when they only do 6-9 dmg each. I start picking off his drones, Hammerhead Is, cant recall if it was 5 or 7 altogeter but in the middle of this fight it finally came into my head that I might make this my first story, and I decided to snap a picture of it. 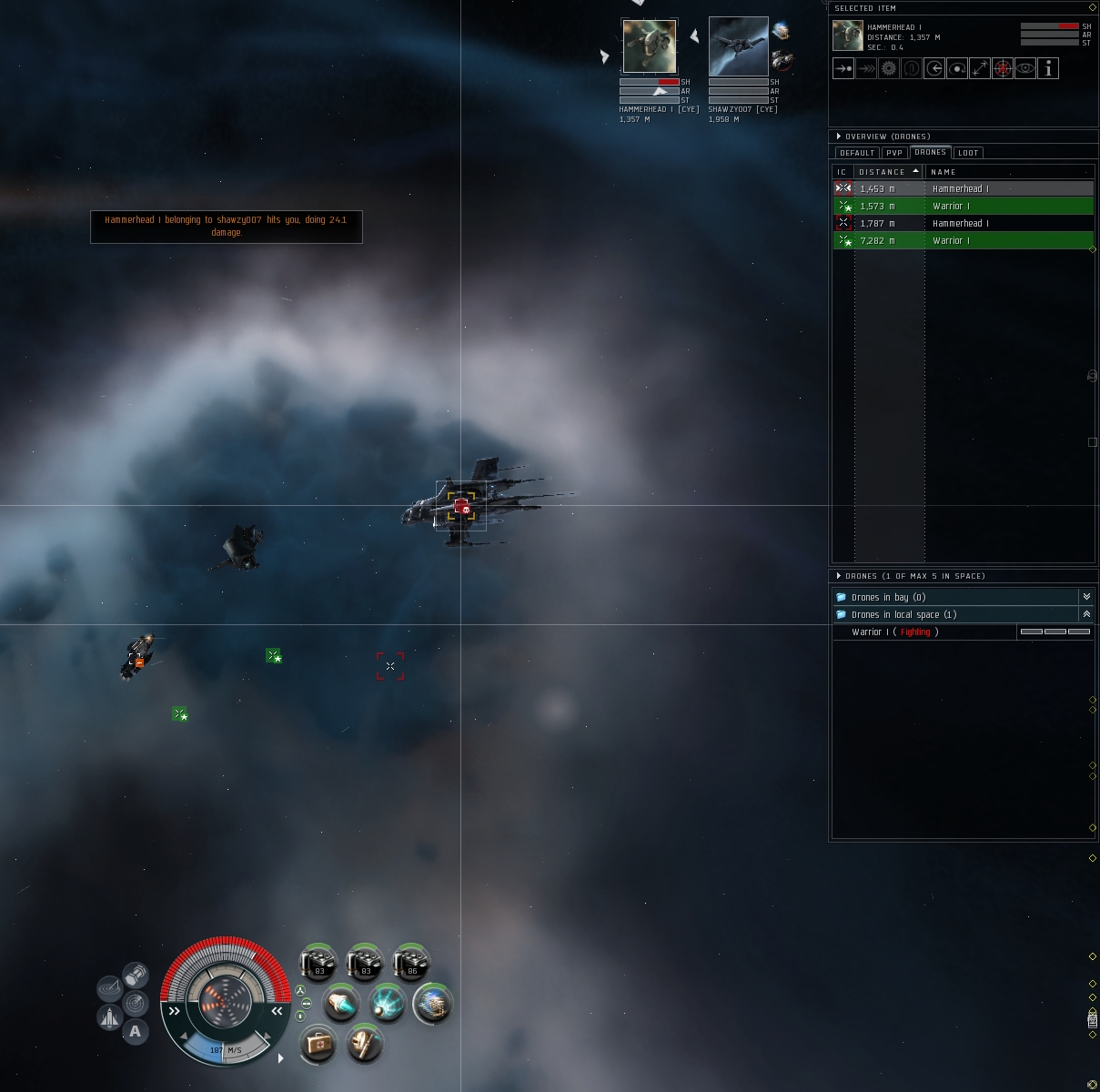 As the last of the drones go pop, I see something red warp into the belt, great, bbylethh is back! And hes in a Badger II! Wait what? A BadgerII??.... And hes warp scrambling me... WTF. Well whatever, if he wants to die, so be it. At this point my armor and capacitor are very low but with no drones to bother me there isnt much to worry about, he goes pop pretty quickly. He drops some pretty decent loot too, turns out he was even rigged! Here is the link, note the warp scrambler hastily slapped on to his normal hauling/salvaging fit. 50 mil in rigs and more in mods and the ship shot to heck for nothing, oh well his loss.

The raven has started firing cruise missiles again now, finally... Theyre doing some decent damage to my poor little drained Incursus. I warp out, repair, and come back to find the second pilot now in a Drake, helping his friends Raven. I stick around long enough to snap a screenshot of them both. 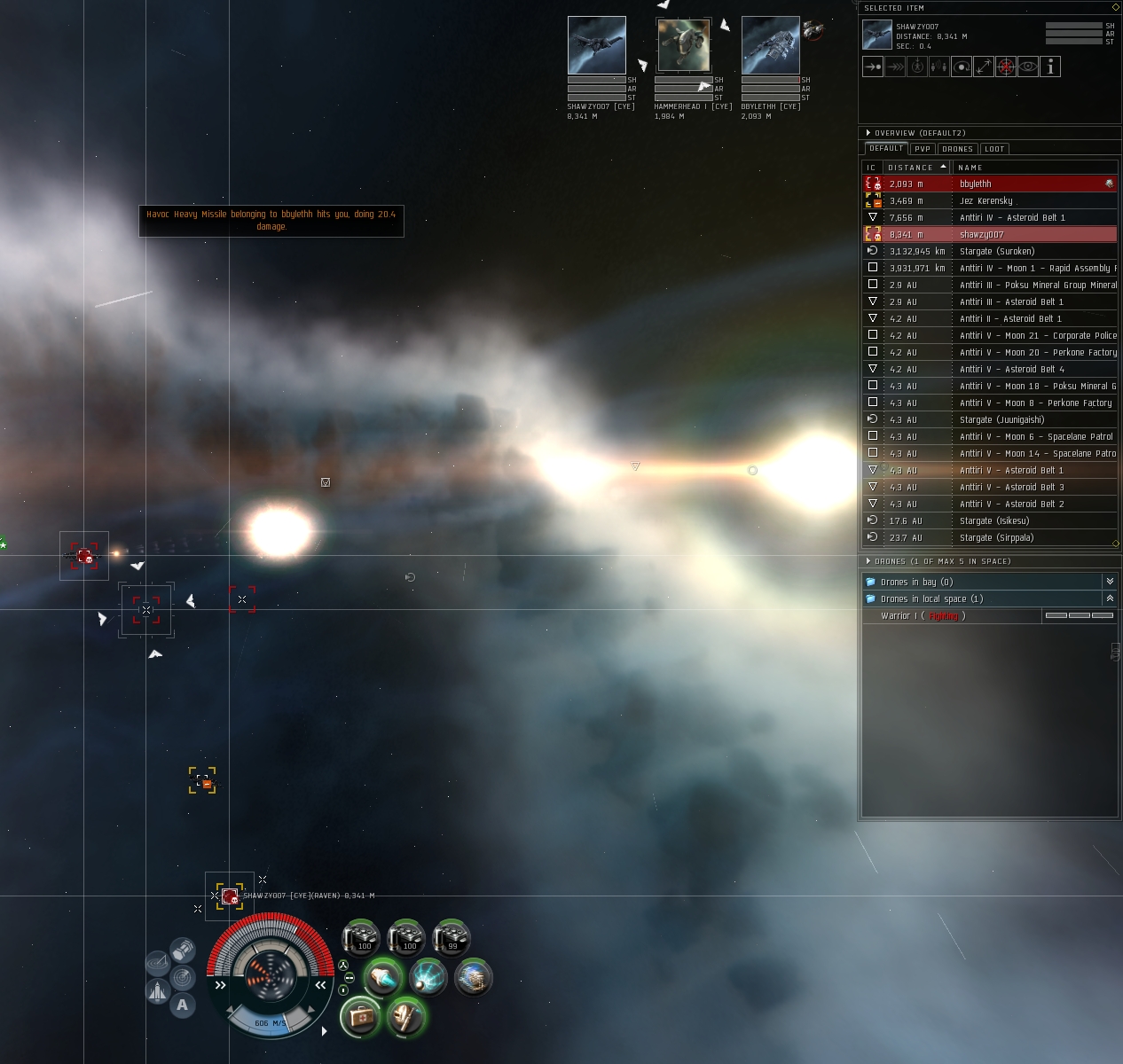 I warp out once more, repair, and warp to within 100 of the belt and float around outside, observing the distraught miners. They decide to throw around a little smack talk, the first few lines are after each of the first few fights:

I notice that bbylethh has less time left on my aggression to him than the raven, I keep them out of range while waiting for the timer to expire, when it does, I take another crack at shawzy. He loses all of his drones again, but this time, Im not out of cap and armor. bbylethh and their friend, Jez Kerensky who you probably noticed in all of the other screenshots are still hanging around me, dropping cans, as though thinking I want to fight a Raven, Drake, and Thrasher in my Incursus... 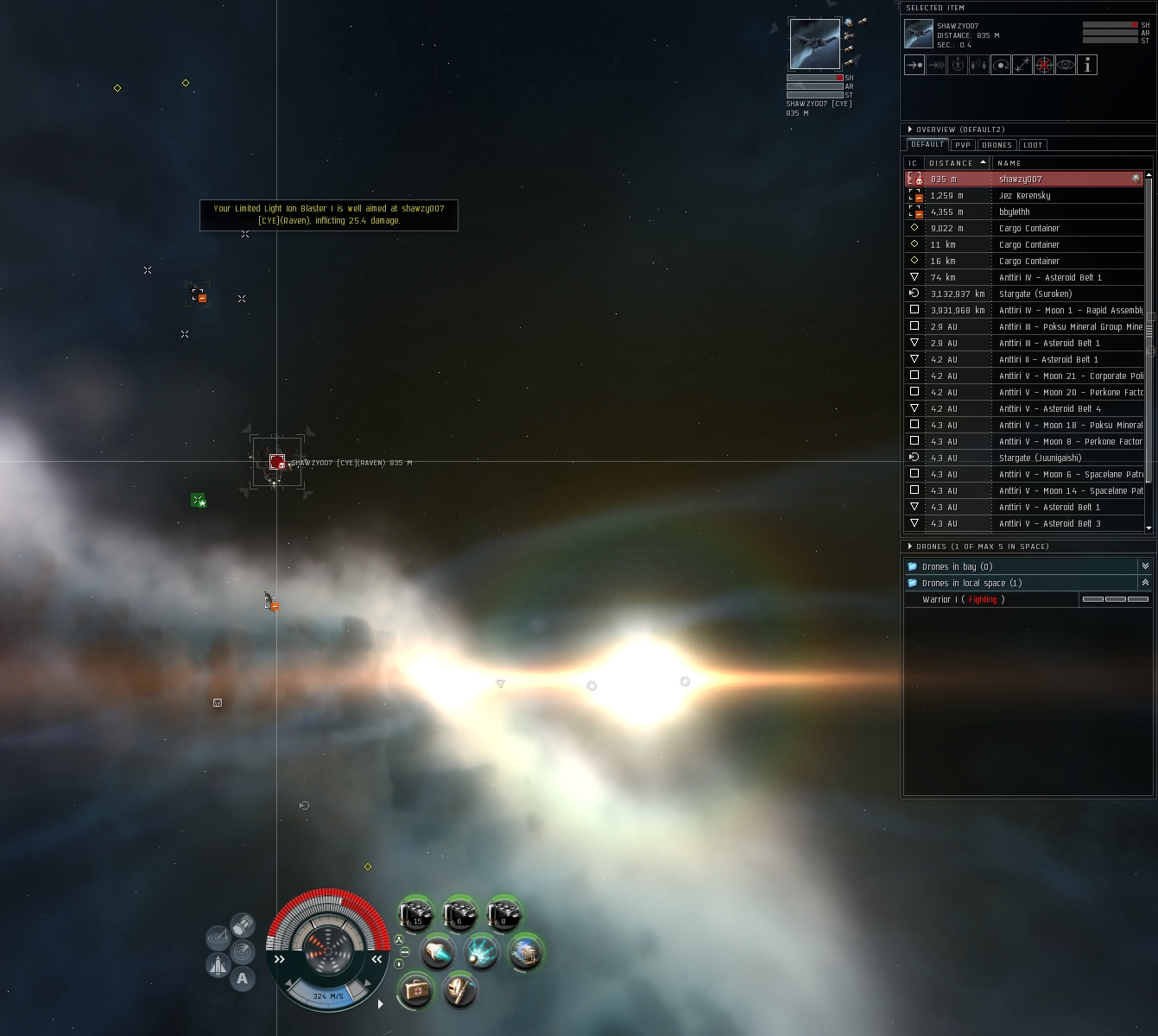 I hit shawzy with all I have, but unfortunately I cant break his tank. He launched 4 more Hammerhead Is after a couple minutes, I wasnt paying attention but it seems like his corpmates may have have dropped some spares for him. In any case, I cant keep up the fight in the Incursus any longer, and head back home, disappointed that I missed out on my first BS kill.

So in the end, I wound up with only a Retriever and an expensive Badger II destroyed. But for being a noob, not confident enough in my skills to fly anything larger than a frigate at the time, thats not so bad. I have a good feeling Ill cross paths with these two guys again in the near future, and when I do, I may just get that BS kill. In the mean time though, I keep myself busy with my first 1-man war dec, but thats a story for another day

Trackback specific URI for this entry

sweet risky encounter. Too bad you are the bad guy. good story.
Lol I'll admit im not a human Pirate fan (what with me being a Tender miner and all) but to be honest if you stay in real hi sec systems you dont have to much to worry about......sounds like those guys kinda had it coming. I think I would have counted my loses and cut away from that system after getting blown away ONCE

Very funny story made me laugh